Humanitarian Aid - The Gift of Giving

May 28, 2011
The bus arrived at 7 A.M. to take us to our first mobile clinic in the Binh Thanh province. When we arrived, many people were already waiting to be seen by the doctors. The patients mainly consisted of the elderly and the very young. All were local to the area and were chosen specifically by clinic organizers based on need--those chosen received tickets. Of the 300 tickets distributed to the locals, nearly all were present at the clinic. Regardless, everyone that came seeking medical care was seen--even those that did not receive tickets.
In the next several days, we assisted two more clinics near Hue. One was similar to the first, and the other was aimed primarily at children aged 12-15 years old. In total, approximately 800 people were seen and treated. Our responsibilities at all of these clinics were fairly similar. These included taking blood pressure, taking weight, distributing medicine and powdered milk, registering patients and directing patients within the clinic. It became clear that one of the most common ailments in this region was parasitic infection. As such, we soon ran out of the appropriate medicine. The clinic organizer later explained to us that the quantities of medicines needed for each clinic are difficult to predict, as the common ailments differ between provinces. The obvious exception was the powdered milk. Every clinic, without fail, ran out of powdered milk--at two of the clinics, we resorted to barricading the door to keep out the patients desperate for milk. As soon as they heard that we were only giving milk out to the most needy people, they started shouting out their ailments. It was clear that they all had legitimate reasons for needing the milk, but we simply did not have enough.
As healthy-looking Americans, many patients assumed that we were doctors. They desperately showed us their cataracts, wounds, scars, hunched backs, gnarled hands and aching knees in hopes that we could help them. Those of us not fluent in Vietnamese quickly learned how to say, "I'm not a doctor. I'm sorry." Although it was depressing to see the extent of suffering in rural Vietnam, it was comforting to see that they left at least a little bit better off than they came.
-Fanny Du, Sophia Yang, LilyAnne Jewett
UC Berkeley students
// Volunteers for Medical Outreach // 1:39 PM No comments:

The Value of Education

The following day (Thursday), we visited a school in the Quang Loi province, sponsored by Aid to Children Without Parents (ACWP), where we were met with 57 energetic second and third graders. All of these children were either orphans or from poor families. Since the two classes were taking time out of their schedules to accommodate our visit, we decided to use our personal money to purchase some small gifts for each of the school children. They were very excited to receive the goody bags of jelly treats, crackers, and chocolate milk. While ACWP sponsored the school, the room was still very basic and there were barely enough seats to go around. Regardless, the children were happy to see us and one even gasped when he heard that we were students from America. Almost every child performed an array of Vietnamese songs and dances for us. In exchange, we were asked to perform two American songs--we chose the "Little Teapot" and N'Sync's "Bye, Bye, Bye." The students were also curious about our backgrounds and what school we were from. They asked us thoughtful questions such as, "Why do you care so much about us? 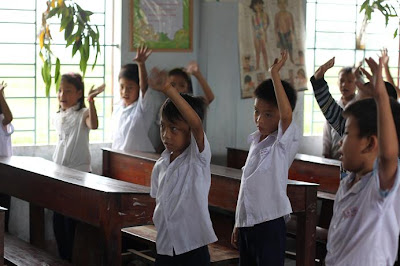 Second and third graders singing and dancing
Though the American educational system is not perfect, at least there is still free education, even for those who can't afford it. However, in Vietnam, students have to pay to go to school. If the ACWP-sponsored school didn't exist, these kids would not have a chance to receive any education. As UC Berkeley students, we value education as a priority and we wanted to have a firsthand look at the state of the educational system in Vietnam. By seeing this, we can determine student needs in order to provide them further assistance in the future. 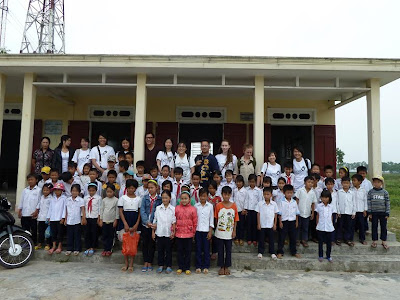 On Wednesday, we woke up to the ringing phone announcing that we would soon be leaving for the Quang Loi province to assist in the administration of about a hundred hepatitis B vaccinations. Our destination was an hour from our hotel through several miles of rural countryside--we were there before we knew it. We weren't allowed to administer vaccinations, but we were prepared to calm down crying children--after all, eight year-olds in the U.S. are--let's be honest--wimps. We soon found that we were unnecessary. These kids were troopers. 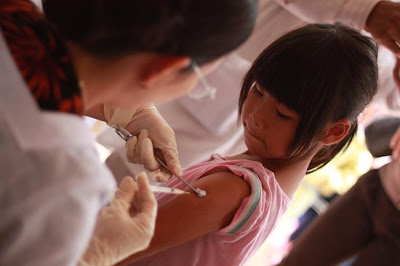 A girl braving through her hepatitis B shot
With 100 vaccinations funded, 87 children were seen at the clinic on Wednesday; 13 were too sick to be seen. Of the 87, three of these eight year-olds were diagnosed with hepatitis B. One of these three was a kid we had been playing "đá cầu" (a shuttlecock kicking game) with just minutes earlier. Although it came as a shock to us, it was rewarding to see all of the fundraising go to a legitimate and worthy end because we were told that a majority of these children would have contracted hepatitis B at some point in their lives otherwise. As the hepatitis B vaccination is a three-step process, we were assured that these students would be returning in the next six months to receive their follow-ups.

And even though many had just received their immunizations, they had plenty of energy left to play a game of đá cầu with us, in which they pretty much kicked our butts. It got so intense that even the government official observing us decided to jump in and help us out. 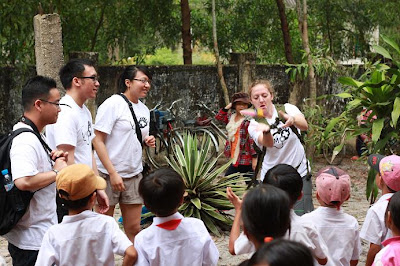 VMO members sporting a game of shuttlecock with the kids
The whole experience was definitely one to remember.
-Ryan Quan
3rd year UC Berkeley student
// Volunteers for Medical Outreach // 11:52 AM No comments: